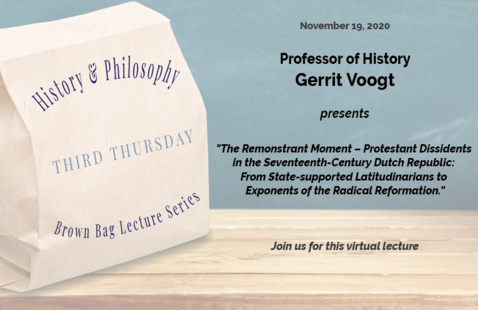 The History and Philosophy Department will be hosting their November Third Thursday Brown Bag Lecture Series. This virtual event on November 19, 2020 can be accessed here. The event starts at 12:30 PM.

The Remonstrant Moment – Protestant Dissidents in the Seventeenth-Century Dutch Republic: From State-supported Latitudinarians to Exponents of the Radical Reformation.

The Remonstrants (or Arminians, named after Jacobus Arminius) were a dissident religious group in the Dutch Republic. Their clash with the orthodox Reformed or “Counter-Remonstrants” rocked the fledgling Dutch Republic during the Truce in the long war of independence from Habsburg Spain. It ended with the condemnation of the Remonstrants at the Synod of Dort (1618-19) and the expulsion of their ministers. A period of persecution followed, but later the Remonstrant Brotherhood was grudgingly condoned.

My book project of many years has focused on the debate about and issues surrounding toleration and freedom of conscience occasioned by these events, a debate that Jonathan Israel characterizes as “by far the most important toleration debate in Europe for about a century from the 1580s…down to the time of the Glorious Revolution in Britain and the publication of Locke’s essay on toleration.” The conflict was fought out in a pamphlet war – in art and literature, in ecclesiastical histories, and finally in the annals of the Republic of Letters.

Department of History and Philosophy